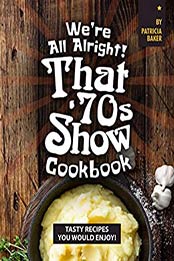 Hanging out, down the street, the same old thing we did last week! I don’t think the song will grow old for any of us!

That ‘70s show, a comic series about a bunch of teenagers trying to make something out of their lives while fighting societal pressures of sex, alcohol and parties, has entertained us for 8 seasons.

Eric, Steven, Michael, Fez, Jackie, Laurie and Donna are close-knit friends who face life’s ups and downs together. They hang out at Eric’s basement and are popularly known as the basement gang. Each character has contrasting personalities and levels of intelligence. Michael Kelso is widely regarded as the dumbest character on the show and also one of the funniest. Fez and Red too tickle your funny bone and so does Donna’s dad, Bob.

One aspect of the show that remained constant throughout the series is Kitty’s (Eric’s mother) love for cooking. She is seen cooking or serving food in almost all her scenes! She loves laying down a tableful of yummy food for five members-Red, Eric, Laurie, Steven and herself-every single day.

As per trivia, the cast and crew enjoyed the food prepared by Kitty during breaks. Fans of the show wish she put out a cookbook of all her mouth-watering delicacies. Guess what? Your wish is fulfilled!

This cookbook is dedicated to Kitty’s recipes as well as some of the other characters’ favorite foods.

Go on, call your friends over and throw them a That ‘70s Show party!