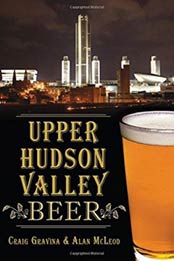 The Upper Hudson Valley has a long and full-bodied brewing tradition. Arriving in the 1600s, the Dutch established the area as a brewing center, a trend that continued well into the eighteenth century despite two devastating wars. The Erie Canal helped develop Albany into a beer capital of North America–“Albany Ale” was exported across America and around the world. Upper Hudson Valley breweries continued to thrive until Prohibition, and some, like Beverwyck and Stanton, survived the dark years to revive the area’s brewing tradition. Since the 1980s, there has been a renaissance in Upper Hudson Valley craft brewing, including Newman’s, C.H. Evans, Shmaltz and Chatham Brewing. Beer scholars Craig Gravina and Alan McLeod explore the sudsy story of Upper Hudson Valley beer.