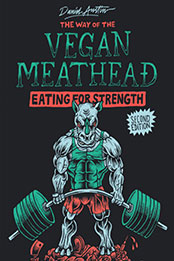 In the second edition of The Way of The Vegan Meathead, champion powerlifter Daniel Austin demolishes the mass of lies you’ve heard about the “difficulties” of building strength on a vegan diet. He’ll show you how eating to become a Vegan Beast is easier than you ever thought it could be.

After going vegan in 2005, Daniel has gone from being the stereotypically “skinny vegan” to winning competition medals on national and international platforms, continuing to hone greater strength year after year, proving that veganism is no impediment to fitness – so long as you know how to build your diet in accordance with your goals.

With an hour-by-hour, calorie-by-calorie meal plan that comfortably overshoots protein requirements for strength athletes, The Way of The Vegan Meathead will have you poised to achieve new personal records and leaner body composition in no time. Packed from cover to cover with seemingly unconventional yet easily digestible expertise regarding nutrition, supplementation, and ample doses of motivational shit-talking, this book will drag you by the collar to meet your new, stronger self. You’re welcome.

PRAISE FOR DANIEL AUSTIN and THE WAY OF THE VEGAN MEATHEAD:

“Daniel is a vegan superhero if there ever was one. Anyone who is looking to improve their mental game, and do it with purpose, should be reading The Way of The Vegan Meathead.” ─Giacomo Marchese, co-founder of VeganProteins.com and Team PlantBuilt

“If you want to be a beast like the strongest beasts: gorillas, elephants, rhinos, and other vegan powerhouses of the wild, Daniel Austin shows you how. In addition to being an accomplished athlete, Daniel is incredibly passionate about helping others become their best version of themselves, having compassion for all, and I would totally take his advice.” ─Toni Okamoto, Plant Based on a Budget

“The Way of The Vegan Meathead is an excellent read for anyone interested in veganism and lifting. Daniel writes from the heart about his personal experiences of being a ‘Vegan Meathead’ and shares his unique perspective. Daniel is the perfect example of what it means to be a compassionate man.” ─Natalie Matthews, Fit Vegan Chef and NFF Bikini Pro

“I’ve been training for powerlifting since reading the first edition of The Way of Vegan Meathead. I started working out a few years after becoming vegan, but without the proper nutrition and programming, I encountered a lot of plateaus as a beginner. Daniel really helped me get on track and come up with a consistent plan for me to follow. Since then, I’ve conquered many of my strength goals including benching over 315 pounds and deadlifting over 500 pounds. I owe it to Daniel for his guidance about nutrition, programming, and for giving me the structure I needed to enter into the world of vegan strength.” ─Nicholas C., Texas

“I’ve been lifting weights on a plant-based diet for almost a decade now, but this book made me rethink everything I believed to know about nutrition and especially supplements like creatine. Sure, some might say it’s “bro-science,” and to those I can only reply: So what? It fucking works.” ─Tim R., Germany

“I’ve been vegan for 16 years, but never considered powerlifting until reading The Way of The Vegan Meathead! Daniel is extremely knowledgeable about what it takes to perform at a high level and lift HEAVY! He gives insightful answers to the age old question of, “Where do you get your protein?,” with plenty of examples and lots of different meal plans! He makes it known in his book that you don’t need to eat meat to lift heavy!” ─Chris N., New Jersey