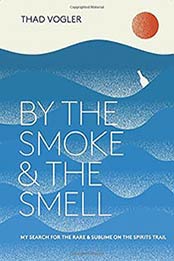 By the Smoke and the Smell: My Search for the Rare and Sublime on the Spirits Trail by Thad Vogler

In By the Smoke & the Smell, spirits expert Thad Vogler takes readers around the world, celebrating the vivid characters who produce hand-made spirits like rum, scotch, cognac, and mezcal. From the mountains of Mexico and the forbidden distilleries of Havana, to the wilds of Scotland and the pastoral corners of France and beyond, this adventure will change how you think about your drink.

Thad Vogler, owner of San Francisco’s acclaimed Bar Agricole and Trou Normand, is one of the most important people in the beverage industry today. He’s a man on a mission to bring “grower spirits”—spirits with provenance, made in the traditional way by individuals rather than by mass conglomerates—to the public eye, before they disappear completely.

We care so much about the food we eat: how it is made, by whom, and where. Yet we are far less careful about the spirits we drink, often allowing the biggest brands with the most marketing dollars to control the narrative. In By the Smoke and the Smell, Vogler is here to set the record straight. This remarkable memoir is the first book to ask the tough questions about the booze industry: where our spirits come from, who makes them, and at what cost.

By the Smoke and the Smell is also a celebration of the people and places behind the most singular, life-changing spirits on earth. Vogler takes us to Normandy, where we drink calvados with lovable Vikings; to Cuba, a country where Vogler lived for a time, and that has so much more to offer than cigars, classic cars, and mojitos; to the jagged cliffs and crystal-clear lochs of Scotland; to Northern Ireland, Oaxaca, Armagnac, Cognac, Kentucky, and California. Alternately hilarious and heartfelt, Vogler’s memoir will open your eyes to the rich world of traditional, small-scale distilling—and in the process, it will completely change the way you think about and buy spirits.

“It’s apparently not enough that Thad Vogler runs two of the best cocktail programs in the nation. With this book, he proves he’s also a talented writer and storyteller. A necessary book at a critical time, By the Smoke & the Smell is principled, impassioned, frank, funny and more than a little cranky, and all the better for it.”
— Robert Simonson, author of A Proper Drink

“I have always admired Thad and his purist’s pursuit of artisan-made spirits. He is an explorer at heart, and a natural-born teacher we all can learn from.”
—Alice Waters

“By the Smoke & the Smell is Adventures on the Wine Route on a globe-trotting bender. Vogler’s journey offers a timely, passionate counter to the commercialism that has threatened to disconnect the spirits we drink from the people, agricultural products, and places they come from. It is a raw look at the business of spirits and the real meaning of ‘artisanship,’ and a must-read for anyone in search of a truer taste of the world’s great distillates.”
—Talia Baiocchi, editor-in-chief of PUNCH

importantly! Don't forget, if you purchased premium access to filespace.com on this site (through the banner below) please contact us by email or telegram