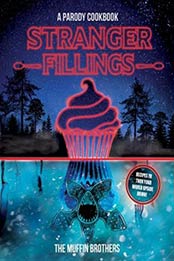 Inspired by the hugely popular Netflix show, Stranger Things, these recipes will turn your world Upside Down!

The hilarious duo behind successful spoof cookbooks such as Baking Bad, Game of Scones, and The Walking Bread is back with Stranger Fillings, a parody cookbook based on THE hit show of 2016, Netflix’s Stranger Things. Featuring recipes such as Demogorgon-zola Tartlets, Friends Don’t Li(m)e Pie, Baked Brenners, and Barb’s Mystery Dip, there will be no shortage of great puns and delicious, edible baked treats.

Stranger Things was one of the most-talked about shows of the year. This delicious parody is the perfect gift to tide fans over until the second season–which hits Netflix in October 2017.