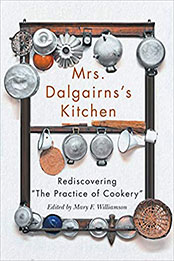 When The Practice of Cookery first appeared in Edinburgh and London editions in 1829, reviewers hailed it as one of the best cookbooks available. The book was unique not only in being wholly original, but also for its broad culinary influences, incorporating recipes from British North America, the United States, England, Scotland, France, and India. Catherine Emily Callbeck Dalgairns was born in 1788. Though her contemporaries understood her to be a Scottish author, she lived her first twenty-two years in Prince Edward Island. Charlottetown was home for much longer than the twelve years she spent in London or her mere six years’ residency in Dundee, Scotland, by the time of the cookbook’s first appearance. In Mrs Dalgairns’s Kitchen, Mary Williamson reclaims Dalgairns and her book’s Canadian roots. During her youth, the popular cookbook author would have had experience of Acadian, Mi’kmaq, and Scottish Highlands foods and ways of cooking. Her mother had come from Boston, inspiring the cookbook’s several American recipes; Dalgairns’s brothers-in-law lived in India, reflected in the chapter devoted to curry recipes. Williamson consults the publisher’s surviving archives to offer insights into the world of early nineteenth-century publishing, while Elizabeth Baird updates Dalgairns’s recipes for the modern kitchen. Both an enticing history of the seminal cookbook and a practical guide for readers and cooks today, Mrs Dalgairns’s Kitchen offers an intimate look at the tastes and smells of an early nineteenth-century kitchen.