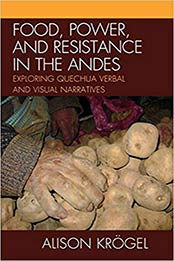 Food, Power, and Resistance in the Andes is a dynamic, interdisciplinary study of how food’s symbolic and pragmatic meanings influence access to power and the possibility of resistance in the Andes. In the Andes, cooking often provides Quechua women with a discursive space for achieving economic self-reliance, creative expression, and for maintaining socio-cultural identities and practices. This book explores the ways in which artistic representations of food and cooks often convey subversive meanings that resist attempts to locate indigenous Andeans-and Quechua women in particular-at the margins of power. In addition to providing an introduction to the meanings and symbolisms associated with various Andean foods, this book also includes the literary analysis of Andean poetry and prose, as well as several Quechua oral narratives collected and translated by the author during fieldwork carried out over a period of several years in the southern Peruvian Andes.

By following the thematic thread of artistic representations of food, this book allows readers to explore a variety of Andean art forms created in both colonial and contemporary contexts. In genres such as the novel, Quechua oral narrative, historical chronicle, testimonies, photography, painting, and film, artists represent Quechua cooks who utilize their access to food preparation and distribution as a tactic for evading the attempts of a patriarchal hegemony to silence their voices, desires, values, and cultural expressions. Whether presented orally, visually, or in a print medium, each of these narratives represents food and cooking as a site where conflict ensues, symbolic meanings are negotiated, and identities are (re)constructed. Food, Power, and Resistance will be of interest to Andean Studies and Food Studies scholars, and to students of Anthropology and Latin American Studies.