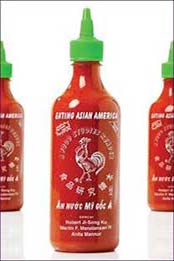 Chop suey. Sushi. Curry. Adobo. Kimchi. The deep associations Asians in the United States have with food have become ingrained in the American popular imagination. So much so that contentious notions of ethnic authenticity and authority are marked by and argued around images and ideas of food.

Eating Asian America: A Food Studies Reader collects burgeoning new scholarship in Asian American Studies that centers the study of foodways and culinary practices in our understanding of the racialized underpinnings of Asian Americanness. It does so by bringing together twenty scholars from across the disciplinary spectrum to inaugurate a new turn in food studies: the refusal to yield to a superficial multiculturalism that naively celebrates difference and reconciliation through the pleasures of food and eating. By focusing on multi-sited struggles across various spaces and times, the contributors to this anthology bring into focus the potent forces of class, racial, ethnic, sexual and gender inequalities that pervade and persist in the production of Asian American culinary and alimentary practices, ideas, and images.

This is the first collection to consider the fraught itineraries of Asian American immigrant histories and how they are inscribed in the production and dissemination of ideas about Asian American foodways.