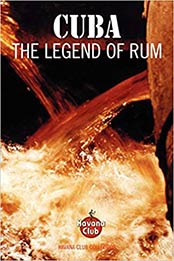 Who really invented the Daiquiri and the Mojito, the world’s most beloved rum drinks? Is it true that Christopher Columbus brought the first sugar cane seedlings to Cuba? What makes authentic Cuban rum different from all others? Spirits and drinks historians Anistatia Miller and Jared Brown explore the birth of Cuban rum and the inseparable relationship it has with the Cuban people and their culture together with rum historian Dave Broom and mixologist Nick Strangeway in Cuba: The Legend of Rum. Rum was not invented by African slaves, who were forced to work on sugar cane plantations throughout the Caribbean. Rather, the birth of this New World spirit traces its lineage to Brazil and southeast Asia. And as the authors discovered, Cuban rum was a child of the Industrial Revolution, taking advantage of technologies that improved the quality, taste, and appearance of this versatile cocktail ingredient. This full-colour, illustrated edition also details the history of Cuba’s famed bars and bartenders, the cantineros, as well as the stories behind such classic Cuban cocktails as the Daiquiri, Mojito, Cuba Libre, and Mary Pickford. Find out how to conduct a tasting of fine, authentic Cuban rums. Discover Cuban rum’s relationship to the Cuban people in their music and their religion. Anistatia Miller and Jared Brown are the authors of Shaken Not Stirred: A Celebration of the Martini and The Soul of Brasil. They are the directors of Exposition Universelle des Vins et Spiritueux in southern France as well as the publishers of Mixologist: The Journal of the American Cocktail. Spirits expert Dave Broom is the author of Rum and contributing editor to Whisky Magazine. Award-winning mixologist and drinks consultant Nick Strangeway is well-versed in the origins and development of classic Cuban cocktails after developing the beverage programme, in 2004, for Floridita London, the British branch of the famed Havana restaurant-bar