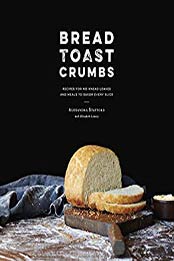 With praise from Dorie Greenspan, Jim Lahey, and David Lebovitz, the definitive bread-baking book for a new generation. But this book isn’t just about baking bread– it’s about what to do with the slices and heels and nubs from those many loaves you’ll bake.

Alexandra Stafford grew up eating her mother’s peasant bread at nearly every meal—the recipe for which was a closely-guarded family secret. When her blog, Alexandra’s Kitchen, began to grow in popularity, readers started asking how to make the bread they’d heard so much about; the bread they had seen peeking into photos. Finally, Alexandra’s mother relented, and the recipe went up on the internet. It has since inspired many who had deemed bread-baking an impossibility to give it a try, and their results have exceeded expectations. The secret is in its simplicity: the no-knead dough comes together in fewer than five minutes, rises in an hour, and after a second short rise, bakes in buttered bowls.

After you master the famous peasant bread, you’ll work your way through its many variations, both in flavor (Cornmeal, Jalapeno, and Jack; Three Seed) and form (Cranberry Walnut Dinner Rolls; Cinnamon Sugar Monkey Bread). You’ll enjoy bread’s usual utilities with Food Cart Grilled Cheese and the Summer Tartine with Burrata and Avocado, but then you’ll discover its true versatility when you use it to sop up Mussels with Shallot and White Wine or juicy Roast Chicken Legs. Finally, you’ll find ways to savor every last bite, from Panzanella Salad Three Ways to Roasted Tomato Soup to No-Bake Chocolate-Coconut Cookies.

Bread, Toast, Crumbs is a 2018 nominee for The IACP Julia Child First Book Award, and Alexandra’s Kitchen was a finalist for the Saveur Blog Awards Most Inspired Weeknight Dinners 2016